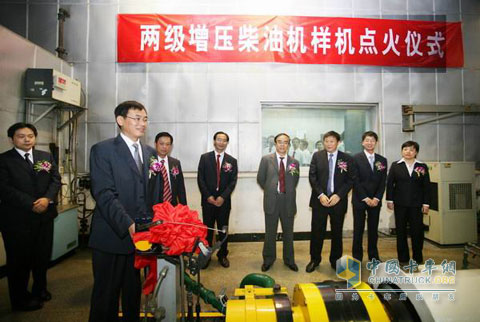 The lighting ceremony was presided over by Cai Zhenfa, secretary of the party committee of the factory. Dong Chunbo, deputy general manager of FAW Group Corporation, gave a warm speech and fully affirmed the successful ignition of the CA6DLD-30E4 two-stage supercharged diesel engine of Xichai. He thanked Xichai for its wide range of technicians. This made a positive contribution and sincerely wished Xiechai to build a factory for the sixty-sixth anniversary and the new factory gate will be completed in double happiness.

This engine uses a 1800-bar high-pressure common-rail fuel injection system. Cooled EGR is used as the main technical route for emission control. The booster system uses a two-stage supercharger. The maximum explosion pressure of the engine is 180 bar, and the emissions meet the national regulatory standards.

CA6DLD-30E4 diesel engine adopts two-stage supercharging technology and has four obvious advantages. First, it has high power density and obvious light weight characteristics. Second, it has low emission and low fuel consumption. It is 2 to 3% lower than the equivalent diesel engine fuel consumption, and carbon dioxide emission is reduced. It is more green and environmentally friendly. Third, it is quicker to respond quickly. As the fresh air enters the cylinder after being pressurized in two stages, the acceleration response performance is greatly improved. Fourth, the cost is low. After the two-stage booster technology is used, the smoke of the engine is greatly reduced. The particle emission is up to the fourth national standard, the post-processing system can be eliminated, the vehicle cost is greatly reduced, at the same time, the engine use is not subject to fuel quality limits, and geographical adaptability is also greatly increased.

Dong Chunbo said that the current demand for the Xichai CA6DL diesel engine is 7,000 per month, which not only generates benefits for the present but also lays a solid foundation for future development. I am very excited to participate in the ignition ceremony of the CA6DLD-30E4 two-stage supercharged diesel engine today. The two-stage turbocharged diesel engine is currently applied in only a few European and American countries in the world, and it has an international leading level. It is the first application in China. At the same time, Dong Chunbo also hopes that Xichai will continue its efforts to install the CA6DLD-30E4 two-stage supercharged diesel engine on the liberation car as soon as possible to further strengthen the liberation and self-reliance of confidence, and to assume its own important responsibilities and make new and greater contributions.