The report of the 19th National Congress pointed out that it is necessary to accelerate the building of manufacturing powers, accelerate the development of advanced manufacturing industries, and promote the deep integration of the Internet, big data, artificial intelligence, and the real economy. 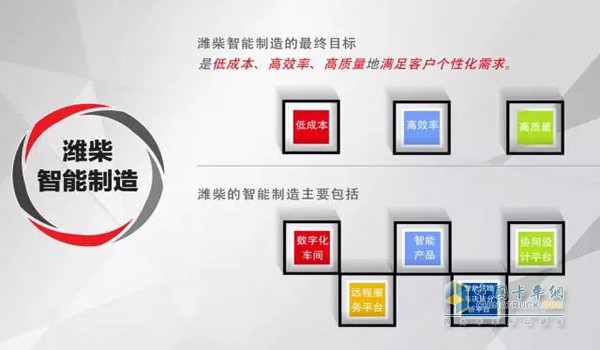 As the leader of China's equipment manufacturing industry, in the new wave of â€œInternet +â€ transformation, Weichai has integrated new-generation information technology such as big data, cloud computing, and artificial intelligence into the entire process of R&D, production, and sales services. , is committed to making Weichai a digital smart company.

In the production and manufacturing sector, Weichai 's factory already has the most advanced digital production equipment and production lines in the world, capable of producing more than 3,000 order numbers in different power, specifications, and styles of engines.

In the R&D segment, Weichai supported the Internet and built a collaborative R&D platform for five countries and ten places around the world to increase the R&D efficiency of new products by more than 20%.

In the service sector, Weichai is focusing on building a full lifecycle support system. Based on a smart cloud platform, it provides cloud services to vehicle manufacturers, distributors, end customers, and maintenance stations in the downstream of the industrial chain, and at the same time, implements the engine through a cloud platform. R & D data collection, remote lock, remote diagnosis, fleet trajectory management, big data failure warning and other functions, and the formation of industry applications, remodeling the post-market business model.

Keywords II: One Belt and One Road

The report of the 19th National Congress pointed out that we must focus on the construction of the â€œOne Belt and One Roadâ€ and adhere to the principle of â€œbringing inâ€ and â€œgoing outâ€.

Tan Xuguang: "As a new development traction, the implementation of the 'Belt and Road' strategy will effectively promote the economic and trade cooperation between China's equipment manufacturing industry and Asia, Africa and Europe, and seek new strategic cooperation opportunities for excess capacity. At the same time, Chinese companies are going out, It will also promote and intrude on the technological upgrading, structural adjustment, and business model innovation of manufacturing companies, and create Chinese gold brands in the global business wave."

From general trade exports, to the export of products and capital, to output technologies and brands, Weichai has long established a global operating prototype in the â€œBelt and Roadâ€ economic zone. Weichai can be seen in Europe, North America, Africa, South Asia, Southeast Asia, the Middle East, the Commonwealth of Independent States and other regions.

At present, Weichai Group's products are exported to more than 110 countries and regions in the world, and the "Belt and Road" related exports account for over 90% of the Group's total exports. 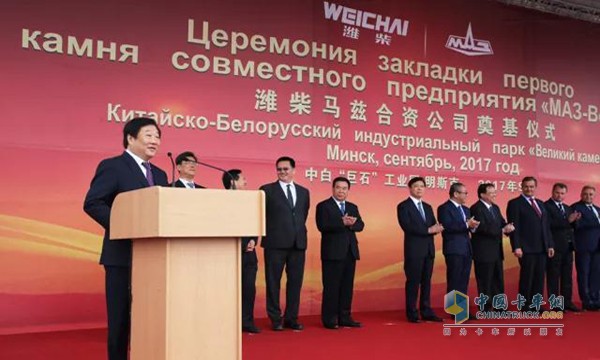 The report of the Nineteenth Congress pointed out that innovation is the primary driving force for development and the strategic support for the construction of a modern economic system.

â€œInnovation is the soul of the company's development. In the past decade or so, Weichai's major leap in each step has reflected the contribution and value of scientific and technological innovation.â€ â€” Tan Xuguang

No matter how the market situation changes, Weichai has always maintained a high investment in technological innovation. In the power sector alone, over the past 10 years, a total of 15 billion yuan has been invested, and it has built up the largest, most functional and most capable engine R&D test base in the country, with world-class R&D and innovation capabilities. In July this year, Weichai also put forward a strategic development road that fully "goes to the high end". Through technology-driven and innovation-led development, we will realize "four high-end technologies" in terms of products, technology, market, and talent.

The report of the 19th National Congress pointed out that it is necessary to stimulate and protect entrepreneurship and encourage more social actors to join in innovation and entrepreneurship.

As a state-owned entrepreneur, he has always had a dream in his mind - to integrate personal ideals into the great practice of national rejuvenation, to seize the opportunity of the transformation of old and new kinetic energy, and to turn Weichai Group into a leading company with international influence. Toward the high end and span over 100 years.

The report of the 19th National Congress pointed out that it is necessary to build an army of knowledge-based, skill-based, and innovative workers, promote the spirit of model workers and the spirit of craftsmen, and create a glorious social atmosphere and an ethos of excellence.

At the Weichai Group's Science and Technology Innovation Awards Conference in July this year, Tan Xuguang proposed that the spirit of great craftsmen should be the soul and build the foundation of the company's high-end strategy. It is necessary to carry forward the culture of craftsmen and unite the spirit of innovation in the first line so that the craftsman spirit becomes the common value orientation and action consciousness of employees.

In recent years, Weichai has successively established labor model innovation studios and chief technician studios to promote innovation for all employees, nurture artisan groups, and create a trend of excellence. Each year, the number of grassroots technological innovations reaches more than 3,000.